In Ancient Greece, every element in the world was associated with a deity, or god. The sun was Helios. The moon was Selene. The winds were the four Anemoi.

However, the most essential element of all was water, which had several deities associated with it rather than just one. Major sources of water were linked to a powerful god, like Oceanus or Poseidon, while minor sources were associated with minor gods and goddesses.

Some of these less powerful and revered water deities were known as the Oceanids. These minor deities were associated with a number of freshwater sources.

Origin of the Oceanids

During the times of the Ancient Greeks, the Oceanids were believed to be the daughters of Oceanus. Oceanus was the Titan God of the Earth Encircling River. He and his wife, the Titanide Tethys, were the parents of 3,000 Oceanids daughters, who were sisters to the Potamoi River Gods frequently mentioned throughout Greek mythology.

The Oceanids were one of the largest, most diverse groups of Greek deities. While Oceanus and Tethys were said to have had 3,000 daughters, the actual number of Oceanids was impossible to calculate.

According to most historians, there were so many Oceanids goddesses that they were practically innumerable. In fact, the Oceanids were so large of a group that they were seldom mentioned collectively. Although their Nereid counterparts only numbered 50 in comparison, the Oceanids represented a nearly limitless variety of goddesses and levels of power.

The oldest Oceanids were considered among the Titanesses. Despite being younger than the most formidable Titans, like Cronus or their father Oceanus, the Oceanids were venerated as goddesses and thought to be older than the Olympians.

That said, many Oceanids had more minor roles and were more akin to water nymphs than powerful goddesses. In fact, throughout Greek antiquity, the term Oceanids was frequently used interchangeably with the term nymphs.

Not all Oceanids were identified with water also. Some were associated with other elements, things, or places. While the parents of all Oceanids were both water deities, they had a wide range of domains extending far beyond the sea.

According to ancient sources, the Oceanids were divided into five separate groups:

• Aurai – Nymphs of breezes and the water found in them

• Leimonides – Nymphs of the pasture

The Role of the Oceanids in Ancient Greek Mythology

In Greek mythology, Oceanids were comprised of both prominent goddesses and minor nymphs and daimones. Although they were classified as a broad group of sisters, they varied in their importance and the role they played in Greek culture.

The eldest were regarded as Titanesses. One of them was Metis, the mother of Athena and first wife of Zeus. Some Oceanids married other prominent gods and Titans, like Poseidon, while others were lovers of Helios and several other gods.

In addition to these roles, many also served as handmaidens and companions to the Olympian goddesses. In fact, Artemis had a loyal following of 60 young Oceanids.

Needless to say, their domains extended beyond the sea. As goddesses of freshwater streams and springs, the Naiads were the most numerous, but others were goddesses of the meadows, flowers, and other elements of the natural world.

Some were daimones and personified specific concepts. Of these, Tyche was the most popular as the goddess of luck and fortune. Some were even associated with the underworld. In fact, Oceanus was the father of several witches as well as the River Styx.

According to several Greek texts, just about any goddess whose family is not explicitly named has been referred to as an Oceanid at some point. Rather than a single group of nymphs, they belonged to a broad classification including any number of goddesses.

Metis was the very first goddess of wisdom and regularly counseled Zeus throughout the Titanomachy. Afterwards, she became Zeus’ first wife. However, Zeus swallowed her after a prophecy revealed their son would overpower him. Despite her internal prison, Athena was eventually born from Zeus and Metis and she continued to counsel the god. 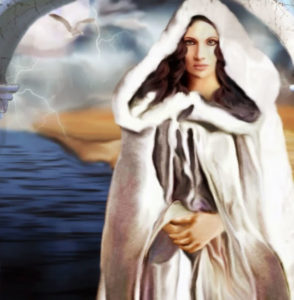 Styx was the first god or goddess to join forces with Zeus during the Titanomachy. To honor her, Zeus made her the goddess of the underworld’s infamous River Styx. 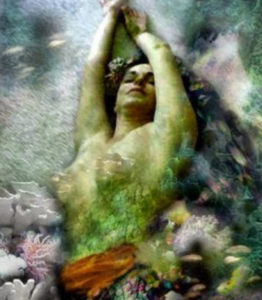 Doris was married to the sea god Nerus, and the two were the parents of the 50 Nereids, or saltwater sea nymphs. 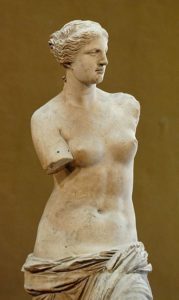 Dione also played an important role. Also known as Dodona, she was a goddess who served the Oracle of Dodona at one of the most sacred sites in all of Ancient Greece. 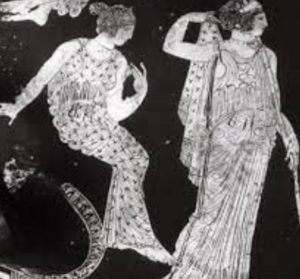 Clymene was married to the Titan Iapetus and was the mother of four Titan sons: Prometheus, Epimetheus, Atlas, and Menoitius. She was also the personification of fame.

Electra was married to the sea god Thaumas and the mother of Harpies as well as the messenger goddess Iris. 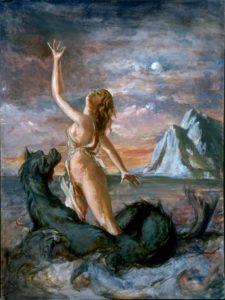 Eurynome was one of Zeus’ lovers and the mother of the Three Charities, or Graces. She is also famous for helping Hephaestus after being thrown from Mount Olympus. 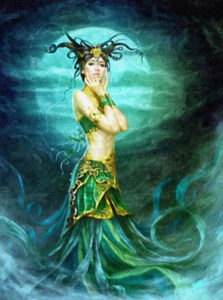 Neda, according to one version, was a nursemaid of Zeus.

Pleione was the wife of Atlas and gave the Titan seven beautiful daughters, known as the Pleiades. Her sister, Hesione, married Atlas’ brother, the Titan Prometheus.

Other Famous Oceanids of Ancient Greece

According to some writers, Merope was a lover of Helios and provided the sun god with a son by the name of Phaethon. Helios also had a relationship with Perseis, another Oceanid. Together, the pair had four famous children: Perses, Circe, Aeetes, and Pasiphae.

Like Neda mentioned above, many Oceanids were nursemaids to other Olympian gods and attendant to their needs. In fact, Artemis, Hera Persephone, and Aphrodite were all attended to by 60 virgin Oceanids. Meanwhile, Dionysus was nursed by the five Nysiades.

In addition to Metis, the goddess of wisdom, and Clymene, the goddess of fame, there were several other Oceanids associated with personified blessings. They were known as the daimones.

The daimones were nymphs or minor goddesses and gods almost completely defined by their roles. In fact, many of their names were directly associated with the items or emotions they represented.

For example, Kratos personified strength. His name actually translates to “strength” in Ancient Greek. He had no mythology beyond this function. Telesto, meanwhile, was the personification of success.

That said, the most well-known of the daimones were Pluto and Tyche. As the goddesses of wealth and fortune, each was widely worshipped throughout Ancient Greece.

Tyche enjoyed a large cult-like following throughout Greece and even Rome, where they referred to her as Fortuna, but she had almost no mythology of her own. Like other daimones, her function came before her Oceanid status.

Most Oceanids or water nymphs were thought to be friendly and kind goddesses who benefitted society in a particular way. However, since Greek philosophers were strong advocates of the need for checks and balances, some Oceanids also had more negative connotations.

This brought balance to the Oceanid goddesses as a group. If one sister was overabundant in any way, one of her sisters would be able to ensure balance was maintained.

For example, the goddess of retribution was Nemesis. She was the daughter of Nyx, the goddess of the night. When Oceanid goddesses like Telesto or Plouton provided unwarranted success or wealth, Nemesis was able to restore balance by taking back some of what was given away.

Other Oceanids were connected to witchcraft. Although they were not necessarily associated with evil or bad intent, these witch goddesses had connections to the Underworld and blurred the lines of morality.

For example, Idyia was King Aeetes’ wife and the mother of Medea, a murderous witch. Meanwhile, Perseis was a lover of Helios whose name literally translates to “the destroyer.”

Perseis children were also destructive. In fact, her daughters Circe and Pasiphae were powerful witches known for committing horrible acts at times.

Keto, another lover of Helios, also had negative connotations. She was often associated with terrible sea monsters sharing the same name.

Although these darker Oceanids were not necessarily considered water goddesses, one with close ties to the Underworld was. Her name was Styx.

We talked about her above, but Styx was a unique Oceanid in every sense of the word. Not only did the water goddess live in the realm of Hades, but she was the goddess of a large river as well. While other Naiads were associated with smaller waterways, she was presiding over major rivers with Oceanus’s sons.

Oceanids and Nereids were both water nymphs and similar in a number of ways. Ancient writers would occasionally name Amphitrite and Thetis, the wife of Poseidon and the mother of Achilles, as Oceanids. However, these two water nymphs were more often thought of as Nereids.

While Oceanids were freshwater nymphs, Nereids presided in saltwater as served as companions to Zeus. They were the daughters of Doris and Nereus, and unlike Oceanids, there were only fifty Nereids, making them much less common than their Oceanid counterparts.