Atreus, in Greek mythology, was Pelops and Hippodamia’s son. He was Mycenae’s king in Peloponnes and father to Menelaus and Agamemnon. The name means fearless or tremble. Collectively, Atreus’ descendants are called Atreidae or Atreidai.

Atreus had a twin brother named Thyestes, and when they were adults, they had a desire for the throne of Olympia, which caused them to kill their half-brother Chrysippus. They went to Mycenae to seek refuge, where in the absence of King Eurystheus, they ascended the throne.

King Eurystheus was in battle with the Heracleidae, and he intended for their stay to be temporary. However, he died in the war, making the brothers’ stay in his kingdom permanent.

Many ancient sources claim that Atreus was the Pleisthenes’ father, but other sources, especially lyric poets, claim that Pleisthenides was another name for Atreus.

The House Of Atreus

Tantalus was the origin of the house of Atreus. He was the son of Zeus and nymph Plouto. He had cordial relations with the gods but decided to test their omniscience by feeding Pelops, his son.

As they sat around for dinner with Tantalus, most gods recognized what he had done and did not eat the meat because of its nature. However, Demeter, whose daughter, Persephone, had been kidnapped by Hades, was distracted, and he ate Pelops’ shoulder.

Because of that, the gods sent Tantalus into the underworld, where he was to spend the rest of eternity standing beneath a fruit tree in a pool of water.

Anytime he tried to reach the fruits, the branches would rise, and anytime he wanted to drink from the pool, the water would recede before he reached it. His suffering was the birth of the worth tantalizing in English.

The gods then brought back Pelops and replaced his shoulder with a piece of ivory with Hephestus’s help.

After winning a race against King Oenomaus, Pelops married his daughter Hippodamia. Pelops won the race by sabotaging king Oenomaus’ chariot, making him lose the race and die.

He managed the sabotage with the help of Myrtilus, who was a king’s servant. Pelops later killed the servant for different reasons. The first reason was that Pelops had promised him that he would take Hippodamia’s virginity but later retracted that promise.

The second reason was that the servant tried to rape Hippodamia later, and third, Pelops did not want to share the victory against the king with anyone. As Myrtilus died, he cursed Pelops and his lineage, which made the existing curse even worse.

Pelops and Hippodamia later had many sons, including Atreus, his twin brother Thyestes, and Alcathous. He also had another son with a nymph, Chrysippus, who was the twin’s half-brother. 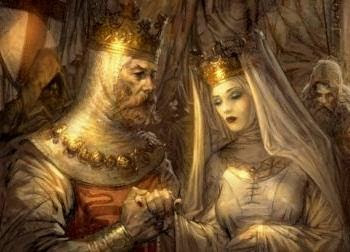 Atreus, to try and redeem himself, vowed to sacrifice to Artemis, his best lamb. He searched his flock, found a golden lamb, and gave it to Aerope, his wife, to keep away from the goddess. However, Aerope gave the golden lamb to Thyestes, her lover.

Thyestes then convinced Atreus that whoever had the lamb should take the throne, after which he produced it and became king.

Atreus went to Hermes for advice on retaking the throne, and Thyestes agreed that he would give back the throne to his brother if the sun moved backward. Zeus accomplished the wish, after which Atreus retook the throne and banished Thyestes.

Atreus later learned about Thyestes and Aerope’s adultery and banished his brother. To seek revenge, Thyestes sent Pleisthenes to kill Atreus. Pleisthenes was Atreus’ son whom Thyestes had brought up as his own.

However, Atreus killed the boy because he did not recognize him. After learning who the boy was later, Atreus planned revenge on his brother, and he called him back to Mycenae in an apparent effort to reconcile.

However, he killed Thyestes’ sons, forced him to eat their flesh, and later haunted him with their feet and hands. Because of eating human meat, Thyestes was forced into exile.

He went to the oracle to ask for advice, and he was told to sire a son with his daughter, Pelopia, who would later kill his brother. After his daughter gave birth, she abandoned the child because she felt terrible about the incestuous act.

A shepherd later found the child, Aegisthus, and gave him to Atreus, who brought him up like his own son. When the boy was an adult, Thyestes told him the truth, and Aegisthus killed Atreus.

Atreus had, however, sired two sons, Menelaus and Agamemnon, and a daughter, Anaxibia, with Aerope. According to some versions of the story, the sons of Atreus and Aerope found Thyestes in Delphi and imprisoned him in Mycenae.

Morpheus
X We use cookies on our website to give you the most relevant experience by remembering your preferences and repeat visits. By clicking “Accept All”, you consent to the use of ALL the cookies. However, you may visit "Cookie Settings" to provide a controlled consent. We use your personal data / cookies, for personalisation of ads and that cookies may be used for personalised and non-personalised advertising.Read more on our privacy policy here
Read More Accept Cookie Settings
Manage consent

This website uses cookies to improve your experience while you navigate through the website. Out of these, the cookies that are categorized as necessary are stored on your browser as they are essential for the working of basic functionalities of the website. We also use third-party cookies that help us analyze and understand how you use this website. These cookies will be stored in your browser only with your consent. You also have the option to opt-out of these cookies. But opting out of some of these cookies may affect your browsing experience.
Necessary Always Enabled
Necessary cookies are absolutely essential for the website to function properly. These cookies ensure basic functionalities and security features of the website, anonymously.
Functional
Functional cookies help to perform certain functionalities like sharing the content of the website on social media platforms, collect feedbacks, and other third-party features.
Performance
Performance cookies are used to understand and analyze the key performance indexes of the website which helps in delivering a better user experience for the visitors.
Analytics
Analytical cookies are used to understand how visitors interact with the website. These cookies help provide information on metrics the number of visitors, bounce rate, traffic source, etc.
Advertisement
Advertisement cookies are used to provide visitors with relevant ads and marketing campaigns. These cookies track visitors across websites and collect information to provide customized ads.
Others
Other uncategorized cookies are those that are being analyzed and have not been classified into a category as yet.
Save & Accept
Powered by