The island of Crete was the home of the legendary King Minos, who worshiped bulls. Poseidon, God of the Sea, gave King Minos a magical bull that rose from the sea.

Poseidon gave Minos this bull on the condition that it was to be sacrificed in Poseidon’s honor, but Minos was so impressed with this bull that he swapped it with an ordinary bull and released the magical bull into his own herd, thinking to trick Poseidon.

Poseidon was enraged. As punishment, the Goddess Aphrodite caused Pasiphaë, the wife of King Minos, to fall in love with the bull from the sea. Pasiphaë became pregnant by the Cretan Bull and gave birth to the Minotaur, a creature with the head of a bull and the body of a man. Poseidon infused the Cretan Bull with his own rage, causing the magical bull to tear up the land all over Crete.

Hercules and the Cretan Bull 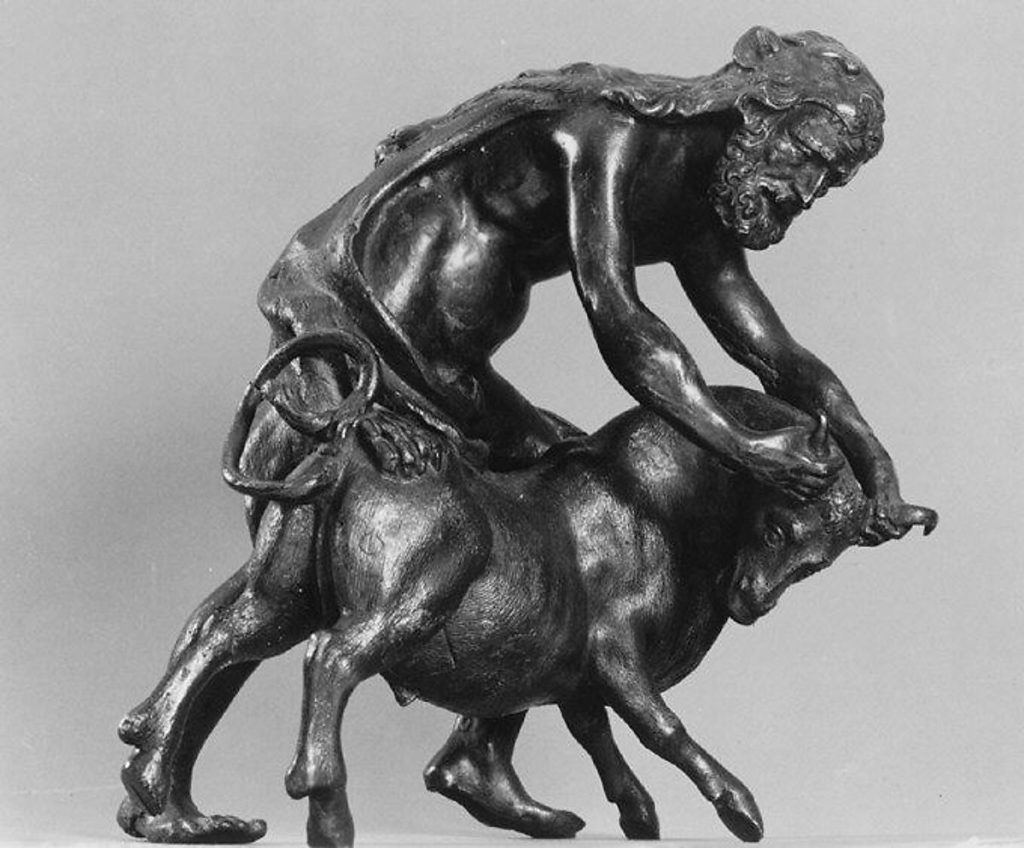 Hercules was sent by Eurystheus to capture the Cretan Bull as his Seventh Task.

When Hercules finally hunted down the bull, who was hiding in the forest at the far end of the island, the bull pawed the earth and threw its head down, ready to charge and attack Hercules.

While the bull has its head down, and was not looking, Hercules quickly grabbed the bull by its horns and threw it to the ground. The bull was dazed and dizzy for a minute.

Before the bull could recover, Hercules had him tied tightly up with rope. Hercules carried the bull back to King Eury, much to the relief of the Minoan people of ancient Crete.

Minos was glad to be rid of the Bull, so Hercules captured it and had it shipped to Eurystheus. Later, the Cretan Bull wandered into Marathon and became known as the Marathonian Bull.

King Minos and The Myth of the Minotaur

King Minos sent his son Androgeos to Athens to compete in the games held each year by the Athens King Aegeus. Androgeos was killed by a bull during the games, which angered King Minos so much that he declared war on Athens and, with the help of Zeus, won. As punishment for the loss of his son to the bull, King Minos imposed a tax on Athens in the form of a recurring nine year sacrifice of an Athenian maiden to the Minotaur in the Labyrinth.

Later, the hero Theseus was sent from Athens to slay the Minotaur and release Athens from the punishing tax.

Crete and the Mediterranean Worship of the Bull

In actual history, Minoan Crete did worship the bull, a popular symbol of fertility and also vegetation. Many cave cultures used bulls in rites for the dead. Parts of Spain worshiped the bull during the same period, and the bull is the most important animal at the Neolithic shrines at Çatalhöyük, an ancient Turkish civilization from 7000 B.C.

The bull was a frequent part of worship in ancient Mediterranean cultures, and only later became a part of Greek mythology in the form of the Cretan bull and its son the Minotaur.