The Nemean Lion was a legendary monster in Greek mythology infamous for prowling and terrorizing the valley of Nemea. It was larger than any other lion and benefitted from fur thought to be impervious to human weapons, making it virtually unstoppable.

Thanks to the lion’s appetite and lore, King Eurystheus made killing it the very first task in the myth of the Twelve Labors to be completed by Heracles, better known as Hercules to most.

Origin of the Nemean Lion

The Nemean Lion is generally considered to have come from Echidna and Typhon, the mother and father of all monsters. However, according to other origin stories, it was the child of Selene and Zeus and fell to the Earth from the moon.

A third and less popular belief is that it was born from the Chimera. Regardless, all accounts point to the lion playing a critical role in ancient Greek myth and legend.

While it is unclear if the vicious beast came from Echidna and Typhon or Selena and Zeus, Greek myth tends to agree it was cared for and trained by Hera. She was angry at Zeus one day, so she dispatched the lion to guard one of Zeus’s temples in Nemea. Viciously standing guard, it kept the people away from the temple and unable to worship Zeus, just as Hera had hoped.

The lion spent its time guarding, stalking, and lurking around the mountain of Tretos surrounding Nemea. It was known for its viciousness and proudly displayed huge sharp teeth and claws that were sharper than swords and could tear through any armor. As an animal child of the gods, the lion also possessed thick golden fur and skin that was impossible for any weapon to penetrate.

This combination of traits made the lion a formidable beast in every sense of the term, but it happened to be quite cunning as well. In fact, it would kidnap women and use them as bait to lure warriors to its den. When a brave warrior would show up to save the damsel in distress, the lion would pounce on him and shred him to bits.

Its cunning was further emphasized by its ability to change its form and shape-shift into the damsels it had kidnapped. Would-be slayers would be tricked into lowering their guard, allowing the lion to devour them at will before offering their bones as a sacrifice to Hades.

Hera loved the lion so deeply, she is said to have placed it amongst the stars after its death, forming the constellation Leo.

Heracles can often be identified in ancient Greek sculptures or paintings simply because of the lion skin he is depicted as wearing. While ancient writers agree Heracles wore a lion skin, they disagreed on where it came from. Some say it was the skin of the Nemean lion, while others say it was from a different lion slayed years earlier when he was 18. 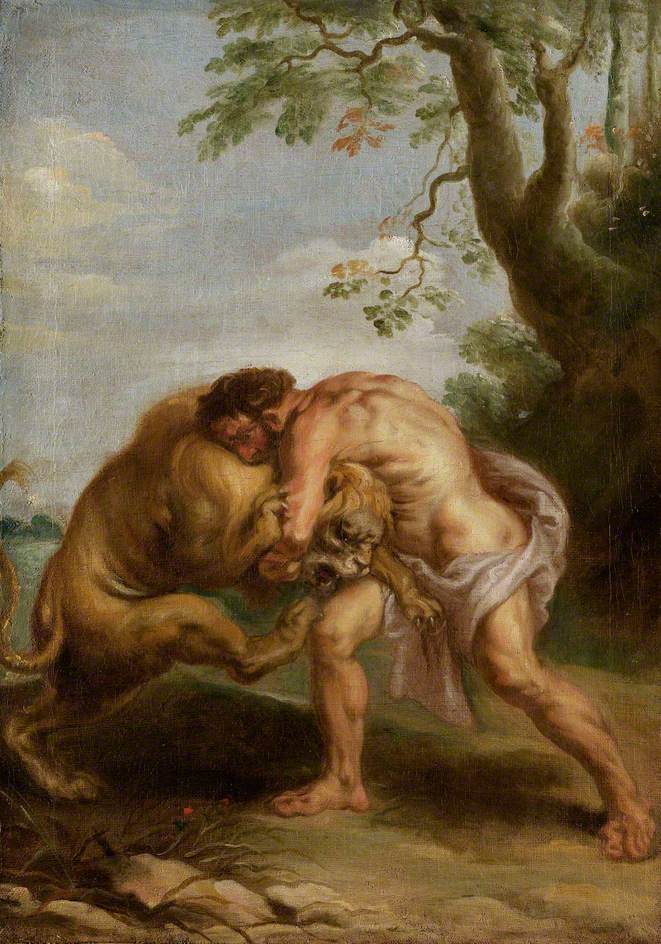 Hera, Zeus’s wife, despised Heracles because he was born from one of Zeus’s many infidelities. In fact, Hera hated Heracles so much, that he eventually went mad and killed his own wife and kids.

Driven by deep regret, Heracles traveled to the famous Oracle of Delphi in search of redemption. He was instructed by the Oracle to give his service to King Eurystheus, the ruler of Tiryns, who had put together a series of tests pitting Heracles up against some of the most terrifying monsters of the time.

The Slaying of the Beast

After being tasked with killing the lion that had been preying on the people of Nemea, Heracles began by studying his opponent from afar. He watched from the bushes as the beast was feasting on its prey. Flesh and blood was said to be clinging to its bushy mane.

Enraged at what he was seeing, Heracles followed the lion as it returned to its den. Before reaching the den, however, he shot one arrow after another at the lion, but none would pierce its hide. Each one just bounced off and dropped to the beast’s feet. Apparently, no one thought to tell Heracles about the lion’s impenetrable coat.

After realizing he would not be able to use his weapons, Heracles continued following the lion bac to its den. He trapped the beast by blocking off one entrance and going in through the other.

As he walked further and further into its lair, Heracles felt around in the dark until he stumbled upon the lion. The lion lunged but was clubbed on the top of the head and began to sway, clearly rattled by the blow.

Seeing an opportunity, Heracles seized the moment and managed to wrap his mighty arms around the beast and put it in a chokehold, completely ignoring its huge teeth and powerful claws. In the end, Heracles merely lost a finger, and the lion was strangled to death.

When all was said and done, he then tried removing the lion’s hide, but his knife couldn’t cut it. He tried and he tried, but even after it was dead, the lion’s skin wouldn’t budge.

After watching Heracles struggle for quite some time, the goddess Athena chose to step in, telling him to skin the creature using its own claws. It worked. He successfully skinned the beast and made a lion skin cape, which was one of his most distinguishing features.

Heracles skinned the lion using its own claw. He was supposed to carry the hide back to Eurystheus as proof of the lion’s death, but knowing its powerful ability to repel weapons made of iron, bronze, and even stone, Heracles chose to keep it and use it as his new armor. So, he threw it over his back, placed the head of the lion on top of his own, and returned to Mycenae.

Upon seeing the dead lion head and hide on Heracles, King Eurystheus was frightened and took flight. Not only was he frightened at the site of the hulk adorned in lion hides, but he was even more shook that he even returned at all.

Heracles’ strength and might scared him more than anything else. So much so that Eurystheus ordered him to stay outside of the city gates on future deliveries of his exploits. The king even had a large bronze jar constructed and buried under the earth to use as a hiding place from Heracles if needed. He also began using the herald to send his commands to the lion slayer, refusing to see him face to face.

In Ancient Greece, an athletic tournament began being held in 573 BCE, and it lasted for several centuries. The tournament was known as the Nemean Games. Like the Olympic Games, it involved a wide range of sporting events.

Some people attribute the beginning of the games as a way of honoring the memory of Opheltes, a local baby who had the unfortunate fate of being killed by a snake. They were said to have been funeral games organized to honor the baby.

Others, however, have credited the origin of the Nemean Games to the story of Heracles and his slaying of the ferocious Nemean Lion.