Home » The Wives Of Zeus

Greek mythology is full of tales involving triumph, slaying of monstrous beasts, and battles for power. Most deities are known for their contributions to the people of Ancient Greece and their influence on cultures throughout history.

That said, there are also more scandalous aspects to Greek mythology. Many stories revolve around infidelity, secret relationships, and children born out of unexpected unions. There’s no more remarkable example of the sordid side of the mythology than Zeus’ many wives.

Zeus was the King of the gods and the leader of the Greek pantheon. He sat upon the throne of Mount Olympus, settling disputes between deities and ruling with a thunderous fist! The King rose to power after the fall of the Titans, leading the Olympians through the most memorable era of Ancient Greece.

But despite all that prestige, Zeus had a reputation for being one of the most infamous lovers in Greek mythology. No goddess, nymph, or mortal woman could resist his advances, leading to several marriages and even more affairs.

The wives of Zeus are plentiful and act as a source of inspiration for many tales. Here’s a lowdown of Zeus’ many marriages as detailed in “The Theogony” by Hesiod.

The Seven Immortal Wives Of Zeus

The wives of Zeus were as follows: 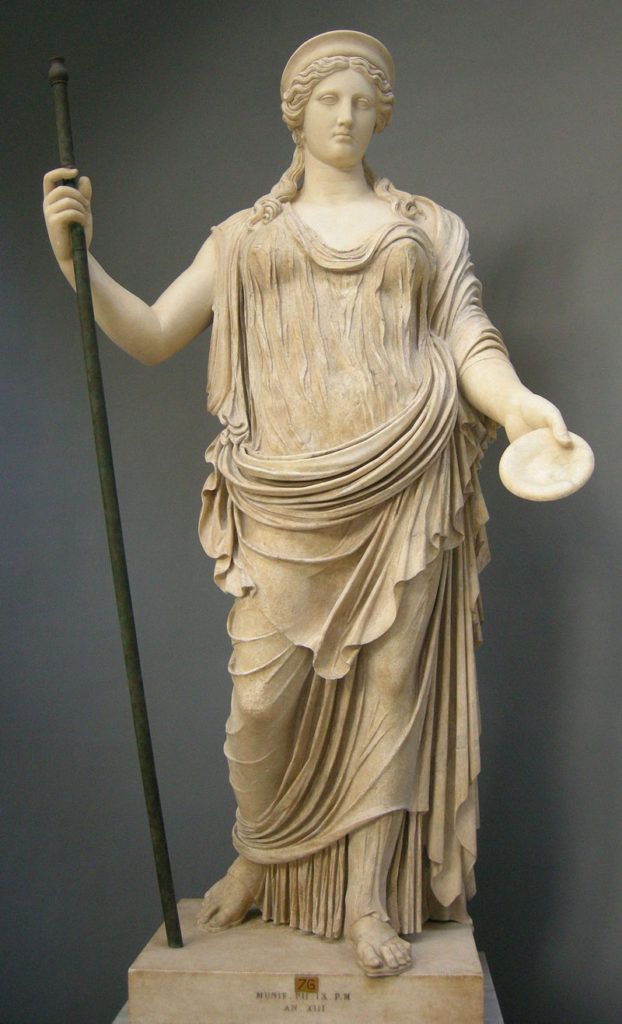 The most famous wife of Zeus is Hera. She was his principal wife and the Queen of heaven.

Hera was also an Olympian. Like Zeus, she was the progeny of Cronus and Rhea. That made her Zeus’ sister.

Legend says that Zeus first appeared to Hera as a bird. She took the bird in, nursing it back to health and taking great care to keep it alive. Eventually, Zeus transformed into his divine form, revealing his true identity. He then seduced Hera, taking her as his wife.

Out of all of Zeus’ wives, Hera is considered the most important. She was an Olympian goddess of women, family, marriage, and childbirth. Her symbolism extended beyond her connection with Zeus, making her an important figure in the lives of Ancient Greeks.

With Zeus, Hera gave birth to several children. They had a total of ten offspring. Some of the most famous include Ares, the god of war, Hephaestus, the blacksmith of the gods, and Hebe, the goddess of youth.

Hera has many illustrious stories written about her. Unfortunately, many of them revolve around Zeus’ infidelity. Hera was notorious for her jealousy. She often directed her rage at Zeus’ many lovers and illegitimate children. Despite her depiction as a matronly figure, she also came off as a vengeful goddess, torturing many who fell prey to Zeus’ advances.

Before Hera became his wife, Zeus fell in love with an Oceanid named Metis. Metis was the nymph daughter of Titans Oceanus and Tethys. She was a second-generation Titan and acted as the personification of wisdom, deep thought, and prudence.

The two became a couple after the fall of the Titans. Metis reportedly helped Zeus save his brothers and sister, who Cronus swallowed. Her help eventually led to the rise of the Olympians.

However, the union did not last long. Shortly after they were married, Metis had a vision. She was gifted the power of prophecy. Metis saw that one of Zeus’ sons would overthrow him as he had done to Cronus. After consulting with Gaia and Uranus, Zeus swallowed Metis.

Interestingly enough, swallowing his first wife gave Zeus the wisdom she held, which helped him become the ruler.

Unbeknownst to Zeus, Metis was already pregnant with her first child. While she was inside Zeus, she slowly began crafting a helmet and shield for her unborn daughter. Zeus developed massive pain in his head as a result.

At this point, Zeus had already moved on and became a father to Hephaestus. He called Hephaestus to use an axe and split his head open to alleviate his chronic headaches. Upon doing so, Metis’ daughter sprung forth. She was Athena, the goddess of war. Athena came from Zeus’ head donning full armor and ready for battle! 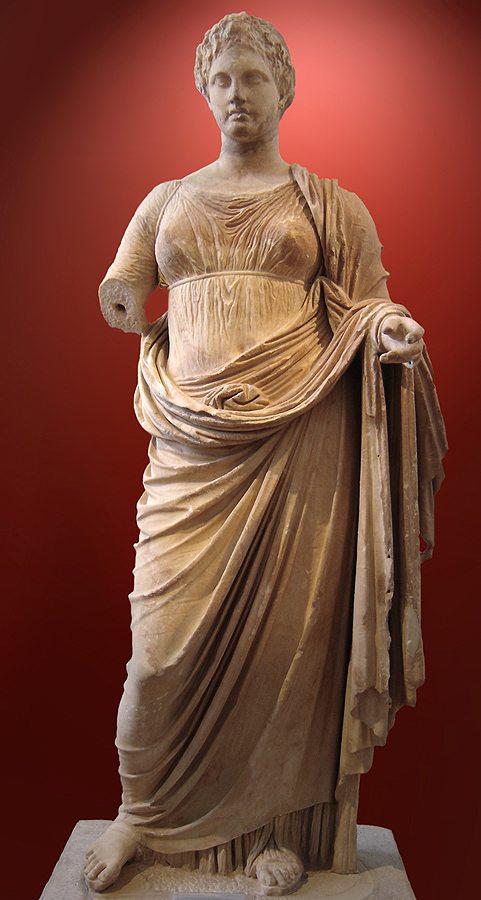 Zeus’ next wife was Themis. She was the goddess of divine justice, law, and order. She was a Titan goddess and the progeny of Uranus and Gaia. Though, some retellings say she was born from

Prior to their union, Themis acted as Zeus’ advisor. In “The Theogony,” Hesiod mentions that Themis played a critical part in Zeus’ rise to power. After the fall of the Titans, Themis helped stabilize the Olympian and facilitated Zeus’ meteoric rise to the throne of Mount Olympus.

Themis gave birth to six children. The first three were the Horae, also known as the Hours. The young goddesses represented the seasons and natural order of time. Their names were Eunomia, who personified order, Dike, a symbol of justice, and Eirene, a goddess of peace.

The other three children from Themis were the three Fates. Also known as the Moirai, the Fates determined a person’s destiny. They were Clotho, the spinner, Lachesis, the allotter, and Atropos, the inevitable. 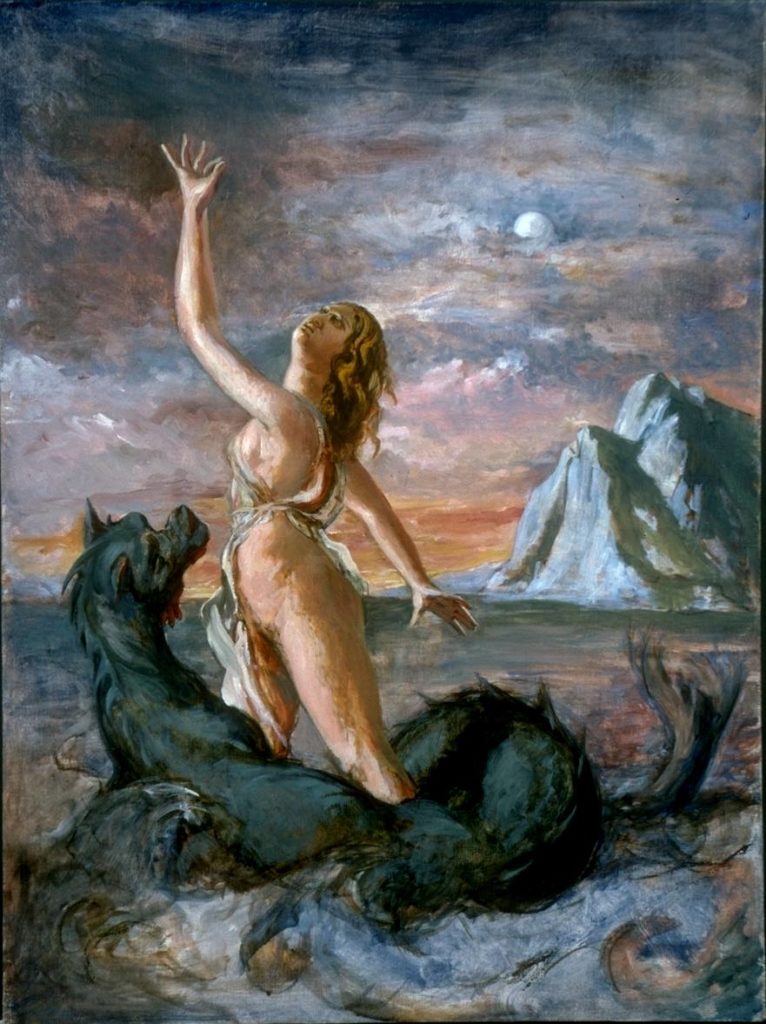 After Themis, Zeus married another Oceanid. Her name was Eurynome. Like Metis before her, Eurynome was a Titan goddess born from Oceanus and Tethys.

Eurynome was often depicted as a beautiful mermaid. According to some accounts, she was one of the elder ocean nymphs. Earlier tales of Eurynome involve Hephaestus. When the blacksmith of the gods was cast from Mount Olympus by Hera, Eurynome and Thetis caught him. She nursed him back to health and raised him as her own child, eventually creating a solid connection with the Olympians.

Later, Hephaestus would marry one of the children Eurynome has with Zeus.

As Zeus’ wife, Eurynome gave birth to the three Charities. Also known as the Charis, these goddesses represented beauty, grace, and goodwill. Their names were Aglaea, Euphrosyne, and Thalia. The daughters personified splendor, joy, and good cheer, respectively. Aglaea was the Charity that would marry Hephaestus. 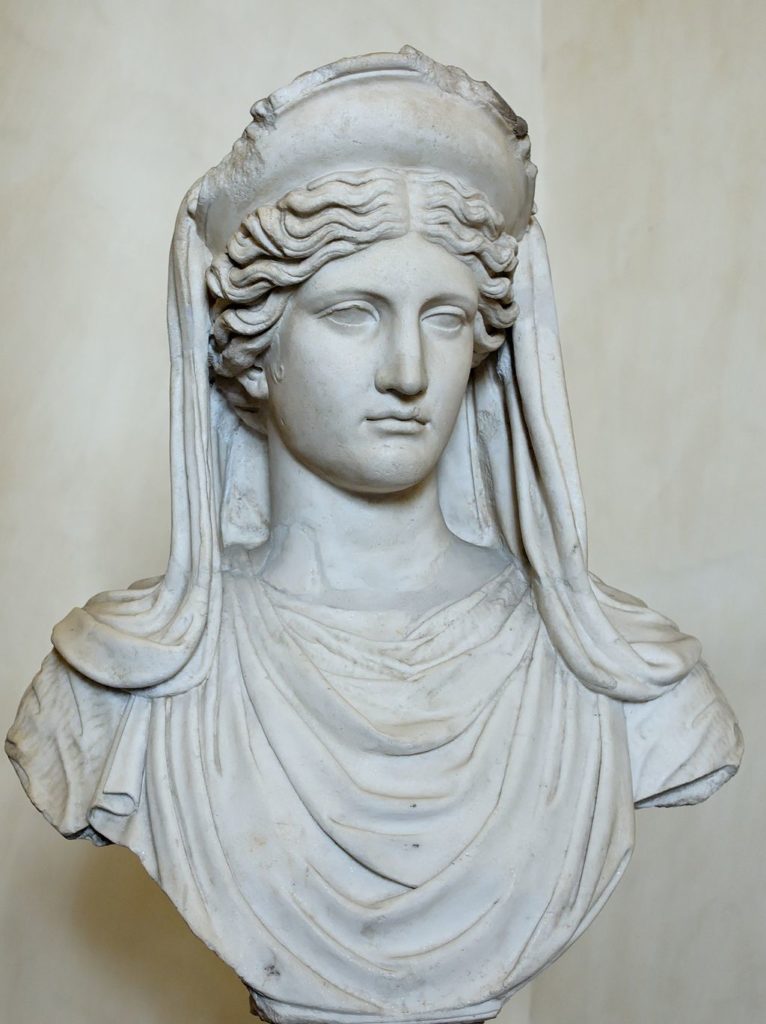 Demeter was the goddess of agriculture. As a deity, she also had connections to the sacred unwritten law, legislation, and the cycle of rebirth.

Demeter was an Olympian born from Cronus and Rhea, making her Zeus’ sister. Like the Olympians before her, she was swallowed by her father Cronus before being saved by Zeus.

Not much is known about how the relationship between Zeus and Demeter transpired. However, most accounts agree that it was not consensual. Some stories say that Zeus came onto Demeter in the form of a bull. Because no mortal or immortal being could resist the King of the gods, they formed a bond and had a child.

Most of Demeter’s stories revolve around her relationship with her daughter from Zeus, Persephone. Hades abducted Persephone, taking her to the Underworld as his bride. Persephone became the Queen of the Underworld while Demeter mourned her loss.

Her devastation with the kidnapping led to crops dying throughout Ancient Greece. While Zeus didn’t play much of a part in the relationship, he did facilitate a deal with Hades.

They agreed that Persephone would spend a third of the year with Hades, a third with her mother Demeter, and the final third with whoever she chooses. She ultimately decided to be with Demeter for two-thirds of the year. The third that she spends in the Underworld created the winter season, as Demeter spends her time mourning and waiting for Persephone’s return in the spring. 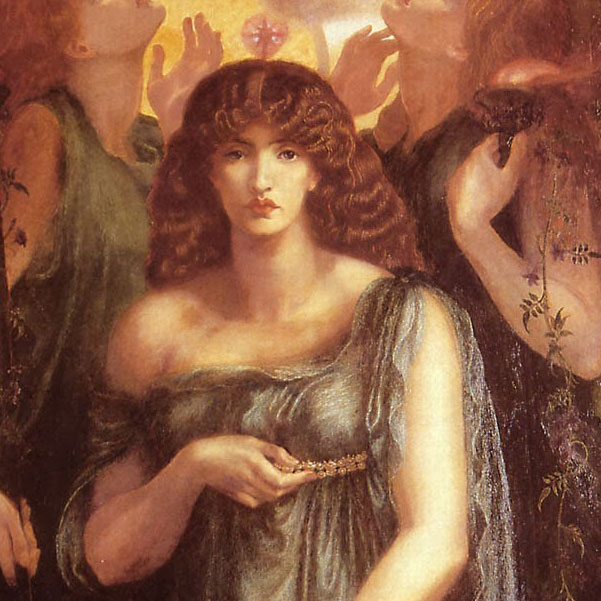 The next wife of Zeus was Mnemosyne. She was a Titan goddess born from Uranus and Gaia. Before she became a consort of Zeus, Mnemosyne was elder Titan Mousai who inspired music. She was also the goddess of memory.

Zeus appeared to Mnemosyne as a mortal shepherd. He seduced her, sleeping with her for nine consecutive days. During that courtship, Zeus impregnated Mnemosyne with nine children.

Those children were the nine Muses. In Greek mythology, the Muses are goddesses who inspired science, arts, literature, music, and more. They reportedly had a well of knowledge that paved the way for poetry, art, and even the literature that retold myths! 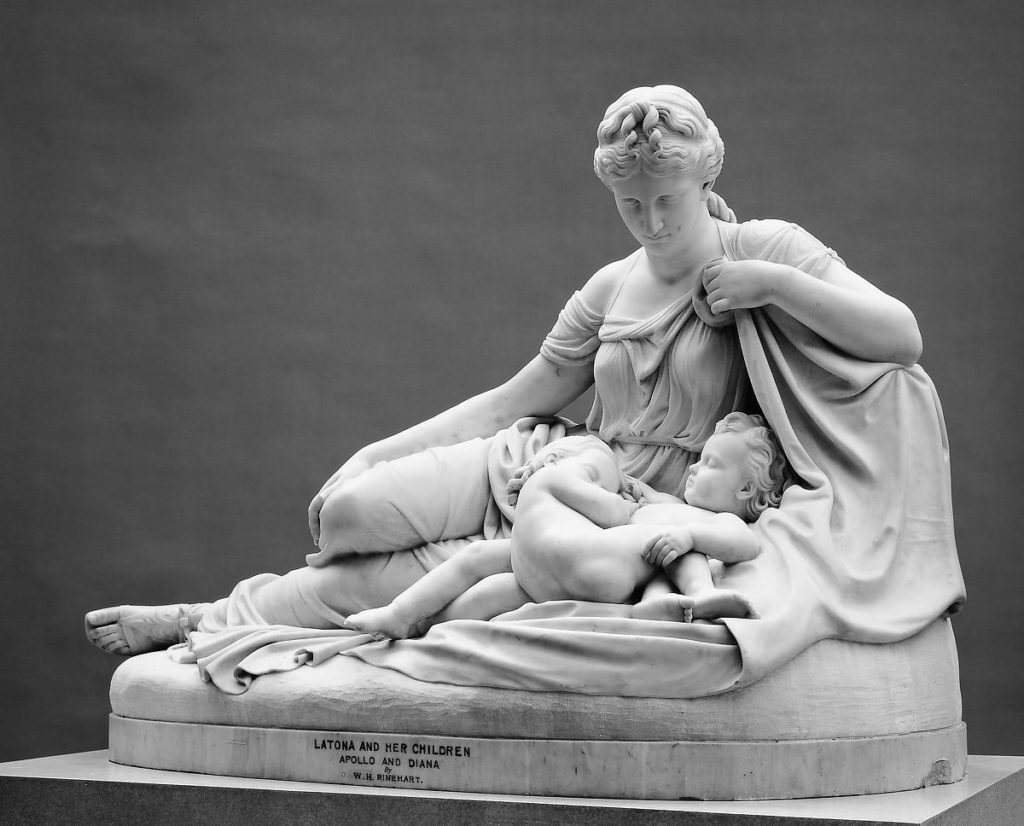 The story of Leto is famous for depicting Hera’s wrath.

Leto was one of several Titanides, the earth-goddess daughters of Uranus and Gaia. She represented motherhood and the protection of the young.

According to the myth, Leto’s beauty caught the attention of Zeus. After seducing her, Leto became pregnant with Zeus’ child. Upon discovering the pregnancy, Hera sought revenge. She forbade Leto from giving birth on any land or island. She was essentially shunned.

Not only that, but Hera pursued her relentlessly. Leto went from one place to the next in search of refuge. Eventually, she found safety on the island of Delos. Some stories say that Poseidon raised the island, separating from the seafloor and allowing Leto to give birth there on a technicality.

Either way, Leto was able to give birth to Apollo and Artemis, the twin gods.

Beyond the seven wives of Zeus, there are other potential connections between the King of gods and various consorts.

Some poets say that Zeus had an affair with Dione, who was counted as a Titan in the “Bibliotheca.” In this version, Dione and Zeus are the parents of Aphrodite rather than having her emerge from sea foam and severed genitals of Uranus.

Another legend mentioned an affair with Semele, who was the daughter of Harmonia and Cadmus. After discovering the affair, Hera reportedly persuaded Zeus to show Semele his true form. In doing so, Semele was burned to death by the god’s thunderbolts. However, he saved the fetus she was pregnant with, leading to the birth of Dionysus.

There’s also the affair with the Oceanid Maia. Zeus seduced Maia in a cave in the middle of the night. The affair was brief, but it led to the birth of the messenger god Hermes.

Zeus had a knack for transformation. He turned himself into everything from an eagle to a good. Other consorts include Europa, Antiope, Lamia, Danae, Thalia, Nemesis, Ganymede, and more.

With those various affairs, Zeus gave birth to an incredible number of children. Beyond the well-known Greek gods and goddesses, some of his children included Eileithyia, Perseus, Epaphus, Pollux, Enyo, and the Litae, among others.