Ancient Greeks had plenty of reasons to fear the sea. The unknowns of the open ocean were a prime source of mystery. Pair that with a slew of monsters that dwelled within the depths of the ocean, and you have the perfect recipe for fascinating lore.

Most people are familiar with Poseidon, the Olympian god of the sea. However, many other deities ruled the waters of Ancient Greece.

Once lesser-known sea god was Phorcys. Phorcys was a god most known for representing the hidden dangers of the seas. According to Homer, he was also regarded as the “old man of the sea.”

Phorcys came before the Zeus, Athena, and the Olympians. According to Greek mythology, he was a Titan born from primordial deities, making him one of the earliest beings to exist on the planet. While his presence isn’t as famous as other gods, his legacy is long-lasting.

The Origins of Phorcys

There are some disputes regarding Phorcys’ lineage. Hesiod is one of the most famous sources of immortal ancestry. The Greek poet created family trees for the gods that most scholars still rely on today.

In “Theogony,” Hesiod states that Phorcys comes from Gaia and Pontus. Gaia is the representation of the Earth. Meanwhile, Pontus was an ancient primordial sea god. Interestingly enough, Pontus came from Gaia without a father. Technically speaking, Gaia’s not only his consort but also his mother.

Pontus and Gaia gave birth to many children. All of them had some connection to the ocean, making them sea gods. Phorcys’ siblings include Eurybia, Nereus, Thaumas, and Ceto.

Eurybia is the goddess of the mastery of the seas. She had control over external factors like winds or rising constellations. Thaumas was the god of sea wonders. Ceto was a sea goddess whose name translates to “sea monster” or “whale.”

Finally, there’s Nereus. Nereus is the god of sea wisdom. Some accounts say that Nereus and Phorcys were one and the same, filling the “old man of the sea” role. However, some scholars also say that they were two separate entities.

Regardless, Phorcys and his siblings ruled the seas in early Greek mythology long before Poseidon and other immortals came into existence.

Phorcys has plenty of unique depictions throughout ancient Greek and Roman history.

One common depiction is that of a gray-haired merman. His nickname of “old man of the sea” fits this context. His hair is aged while he sports a simple fishtail.

Another interesting portrayal appears on Roman mosaics. There, he has the characteristics of a crab. Phorcys appears younger than his “old man of the sea” depiction. Instead of long gray hair, he has a youthful face and build.

However, he’s sporting red crab-like skin. The upper half is human-like. Beyond the red skin, Phorcys has two sets of crab limbs sprouting from his torso. They act as supplementary forelegs, complete with powerful claws.

His human hands hold a flaming torch and a basket. The lower body is snake-like. It mimics the common sea-serpent aesthetic popular in Roman mosaics during that era.

In most accounts, Phorcys represented the darker aspects of ocean life. He lived in a cave in the deepest part of the sea. He was the god of hidden dangers that lie below the surface. The god also personified mysteries life reef and wildlife. Thanks to his wife and children, Phorcys was of all things worth fearing in the ocean depths.

Phorcys ended up marrying his sister, Ceto. Ceto also came from Pontus and Gaia. Her name translates to “sea monster” or “whale.” Most scholars lean to the former translation, as it aligns with her legacy.

Phorcys and Ceto gave birth to many fearsome children. Collectively, they were known as Phorcides or Phorcydes. The offspring are some of the most feared figures and sea monsters in all of Greek mythology.

Three of Phorcys’ and Ceto’s most famous children were the Gorgons. If you’re familiar with Greek mythology, you know these beasts all too well. They frequently appear throughout the mythos, interacting with heroes and gods alike. According to most tales, the Gorgons were personifications of reefs and underwater rocks.

The Gorgons were three dreadful creatures. Their appearance varied a bit from one account to the next. Some said they have snake bodies, while others depicted them as more human-like. However, most retellings agree that the sisters had snakes for hair and sight capable of turning man into stone.

Their names were Stheno, Euryale, and Medusa. Medusa is, by far, the most famous of the Gorgons. Perseus killed her in his heroic legend. The hero decapitated the Gorgon and used her severed head as a weapon to turn onlookers into stone. The other two Gorgons, Stheno and Euryale, were immortal.

The Gorgons weren’t the only trio of sisters to come from Phorcys and Ceto. The Graeae, or Grey Sisters, were personifications of sea foam. The sisters were witches who allegedly shared one eye and a single tooth. Their names were Enyo, Pemphredo, and Deino.

Depictions of the Grey Sisters weren’t the most flattering. They were known as haggard women with gray hair. Some retellings say that they were so old that records of their childhood were long gone. As a result, thoughts of the Graeae as youthful women were unfathomable.

Like the Gorgons, the Graeae are most notable for their interaction with the hero Perseus. During his quest, he went to the Graeae to learn about Medusa. He either wanted to know what items could kill her or where she resided.

Those are Phorcys’ and Ceto’s most well-known children. However, some poets recall other notable offspring. Apollonius of Rhodes says that Phorcys fathered the beast Scylla. Homer says that Phorcys is the father of Thoosa, who eventually gives birth to the cyclops Polyphemus with Poseidon.

Perseus stole the Graeae’s eye as they passed it between them. He held it at ransom until the sisters provided the information he was after. 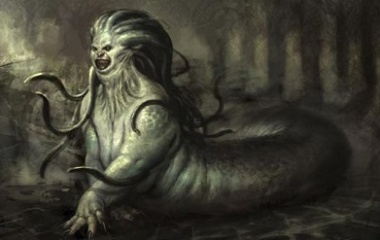 Echidna was a feared dragon serpent. She was half-woman and half-snake, leading to a gruesome appearance that struck fear into humans of ancient Greece.

When she reached maturity, Echidna would become the mate of Typhon. Typhon is another serpent-like monster. However, he was one of the deadliest creatures in all of Greek mythology.

Together, Echidna and Typhon unleashed many monsters into the world. Echidna is most famous for giving birth to the Chimera, the Cerberus, the Hydra, and more.

Also known as Drakon Hesperios, Ladon was a serpent dragon. Ladon is most famous for being the guardian of the golden apples at Hesperides. He served Hera to protect her garden at all costs.

Unfortunately, the beast fell to Heracles during his Twelve Labors. He used arrows poisoned with Hydra’s blood to shoot and kill Ladon.

Those are Phorcys’ and Ceto’s most well-known children. However, some poets recall other notable offspring. Apollonius of Rhodes says that Phorcys fathered the beast Scylla. Homer says that Phorcys is the father of Thoosa, who eventually gives birth to the cyclops Polyphemus with Poseidon.

Like other Greek gods of the sea, Phorcys could have also given birth to many sea nymphs.

Phorcys is a primordial sea god and one of the earliest beings in existence.

He’s known as the god of the hidden dangers of the sea and the old man of the sea.

By most accounts, the sea god is the son of Pontus and Gaia.

The role of Phorcys in Greek mythology is often combined with sea gods Nereus and Proteus. Nereus is also a reported son of Gaia and Pontus. Meanwhile, Proteus is a prophetic figure that Homer called “The Old Man of the Sea.”

Phorcys is one of several powerful deities to control the oceans. He reportedly had siblings as well.

Phorcys married his sister, Ceto. The two resided in a cave in the deepest part of the ocean.

Phorcys and Ceto had many children that were collectively known as the Phorcides. They include the Gorgons, the Graeae, Echidna, and Ladon. Thoosa and Scylla may have been offspring of Phorcys as well.

A harbor in Ithaca was dedicated to Phorcys’ honor.