The most retold stories in Greek mythology involve the Twelve Olympians of the Greek Pantheon. Their action-packed and emotional tales continue to serve as inspiration for media today. The Olympians are, without a doubt, the most famous figures in mythology. However, they wouldn’t reach the upper echelons of lore without the ancestors that came before them.

Before the Olympians ruled the world, the Titans held supremacy. While not as well-known as the later deities, the Titans play an essential role in the myth of creation and the stories to follow.

One Titan worth learning about is Phoebe. A first-generation Tita, Phoebe’s part in Greek mythology is limited. Unlike other deities, she didn’t govern any specific worldly foundation or personify any significant concepts. However, her lineage led to more familiar figures in the Pantheon.

The Origins of Phoebe

Phoebe is the daughter of Uranus and Gaia. Uranus was the primordial god of the sky. Meanwhile, Gaia was the mother of the personification of Earth and the mother of all things. Uranus and Gaia were among the first beings to exist on Earth. They were born from Chaos, starting the entire creation and succession myth.

According to Hesiod in “The Theogony,” Phoebe is just one of many children born from Uranus and Gaia. She’s among the first generation of Titans, including her five sisters and six brothers. Her sisters were Rhea, Themis, Mnemosyne, Tethys, and Theia. Phoebe’s brothers were Cronus, Iapetus, Oceanus, Coeus, Crius, and Hyperion. Uranus and Gaia also gave birth to three Cyclopes and three Hecatonchires, but they weren’t considered Titans.

The birth of the Titans was the stuff of legends. Uranus was the ruler of the universe and wanted to hold onto that power as long as he could. To ensure that none of his children would overthrow him, he hid the Titans deep within Gaia. As for the Cyclopes and Hecatonchires, they were sent to Tartarus.

Gaia eventually hatched a plan. She crafted a sickle, allowing Cronus to come forth from her womb and castrate Uranus. The castration led to the rise of the Titans.

Most of the other Titans had specific roles, personifying fundamental laws of nature and the foundations of the Earth. That’s not the case with Phoebe. Her purpose was more obscure.

What was Phoebe The Goddess Of?

While Roman poets often identified her with the moon, she wasn’t the official goddess of the lunar body. Instead, she was the goddess of bright intellect and prophecy.

From Themis, she received control of the Oracle of Delphi. That granted her the power of prophecy.

Phoebe’s consort was Coeus, a fellow Titan and her brother from Uranus and Gaia. Coeus, also known as Polus, was another Titan deity without a clear purpose. His role was obscure, but most poets referred to him as the personification of the constellations.

Together, Phoebe and Coeus gave birth to some famous children. Phoebe’s offspring have a much more significant role in Greek mythology than hers. As a result, the Titaness is usually only mentioned for her ancestry.

Phoebe’s children were Leto and Asteria. Leto was sometimes regarded as the goddess of fertility. However, she’s most known for her relationship with Zeus after the fall of the Titans. Leto became pregnant by Zeus, which earned her the Ire of Hera. Hera banished her, preventing her from giving birth in most places. Eventually, Leto found solace on the island of Delos. There, she gave birth to Olympians Artemis and Apollo.

Artemis and Apollo were the moon goddess and sun god, respectively. Artemis was also the goddess of the hunt and wilderness. Meanwhile, Apollo was the god of archery, music, and dance. They are the most famous of Phoebe’s grandchildren.

Pheobe’s other daughter, Asteria, was a goddess of necromancy. She ended up marrying Perses, the second-generation Titan god of destruction. Together, Asteria and Perses gave birth to Hecate. Pheobe’s granddaughter Hecate was the goddess of magic, witchcraft, ghosts, and sorcery.

Phoebe During the Titanomachy 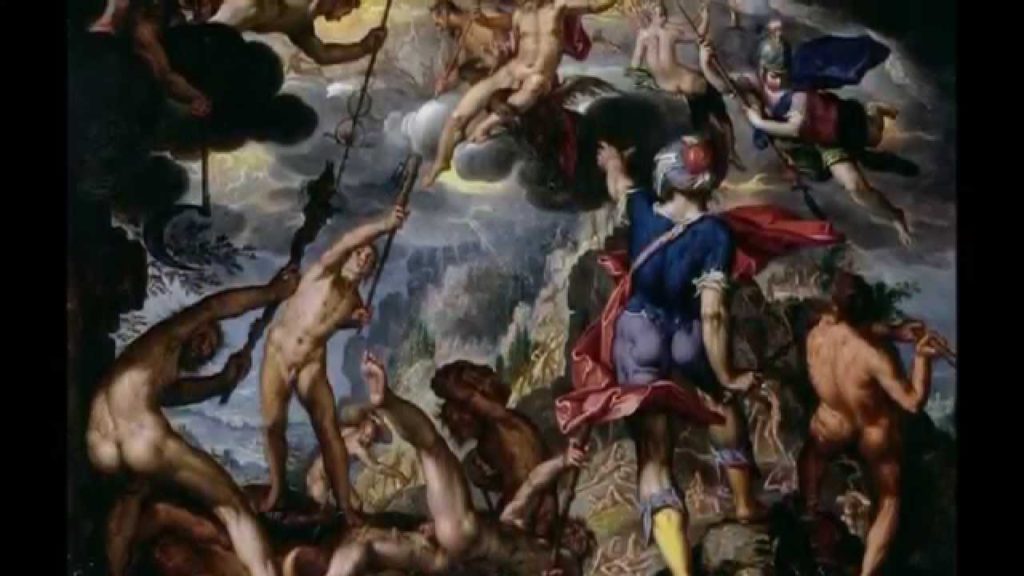 The Titanomachy was a 10-year war between the Titans and the Olympians. Like Phoebe’s father, Uranus, Cronus attempted to eliminate his children to prevent a loss of power. He swallowed each one until his wife, Rhea, devised a plan to save one of her sons. She swapped the infant Zeus with a rock and hid him until he could grow up and overthrow Cronus.

When he reached adulthood, Zeus forced Cronus to disgorge his fellow Olympians. Zeus’ uprising marked the start of the Titanomachy, which is the most significant event in the succession myth.

The battle was treacherous, but Phoebe and the other female Titans were not active in the war. Some poets mentioned that Phoebe was sympathetic to the war, but she did not participate as her husband and brothers fought on Mount Othrys.

Zeus eventually sought help from Phoebe’s long-forgotten brethren: The Cyclopes and Hecatonchires. The Olympian freed them from Tartarus, requesting their aid. They obliged, and the Titans fell.

The fall of the Titans resulted in most of the male Titans being banished to Tartarus. Because Phoebe didn’t partake, she escaped punishment and lived freely during the rule of the Olympians. Zeus rose to power, and the Titan’s supremacy was long over.

Phoebe all but faded into obscurity after the succession of power. While she remained free, her importance diminished. She wasn’t a ruler of the world, and her limited roles within ancient Greece went to other deities.

Her connection to the moon was already questionable, but the rise of Selene eliminated it. Selene became the official moon goddess. On top of that, she reportedly passed the Oracle of Delphi on to another. According to Aeschylus, she gave it to her grandson, Apollo, on his birthday. In doing so, Apollo became the god most associated with the power of prophecy.

The succession of power was hard on Phoebe and the remaining Titans. Not much is known about what she did after the Olympians took over. Her grandchildren became more prominent in Greek mythology, eliminating her from future stories. What she did after the fall of the Titans is lost to the sands of time.

Phoebe’s most significant contribution to Greek mythology is her ancestry. Without Pheobe, there would be no Hecate, Apollo, or Artemis.

Contrary to popular belief, Phoebe is not the official goddess of the moon. Pheobe’s name roughly translates to “bright” or “shining.” For this reason, she had a close connection to the moon. However, other deities took on the role of the moon goddess.

Phoebe is the progeny of Uranus (Ouranos) and Gaia.

She is among the first generation of Titans. Phoebe is just one of the Twelve Titans to come from the primordial deities.

Themis gave control of the Oracle at Delphi to Phoebe. Phoebe later gave the rite to Apollo.

Phoebe was identified with the moon alongside Artemis and her Roman counterpart Diana.

Phoebe and Coeus had two children, Leto and Asteria. Through those offspring, Phoebe’s lineage expanded with famous grandchildren.

Phoebe is the grandmother to Apollo, Artemis, and Hecate.

The Titan goddess evaded punishment after the Titanomachy.